As part of its Intergenerational Transfer of Wealth and Ageing Population project, the Economics and Law Research Institute is investigating the rise in abuse of Enduring Powers of Attorney. 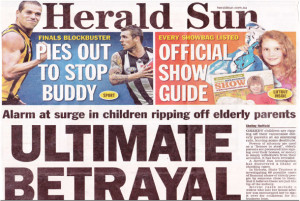 Instead of waiting for funds to be distributed after a person’s death, Powers of Attorney are frequently used by children all over Australia to rip off their elderly relatives by pressuring them into signing over their assets or cash.

This is leaving many elderly people destitute and because most cases are perpetrated by close family members, the majority of incidents go unreported.

The scale of this abuse is significant and growing:

ELRI’s aim is to understand the value of assets held by people over 65 in Australia and to assess the value of those resources that are under threat from EPA abuse.

Understanding the effect this abuse has on the asset transfer risk to the elderly in Australia and the wider community will enable consideration of the current legal framework governing EPAs.

The final findings of this investigation will enable the shaping of fresh legislation to prevent or significantly reduce this type of abuse and enable transfer of wealth to take place without any detrimental effect on the Australian economy.